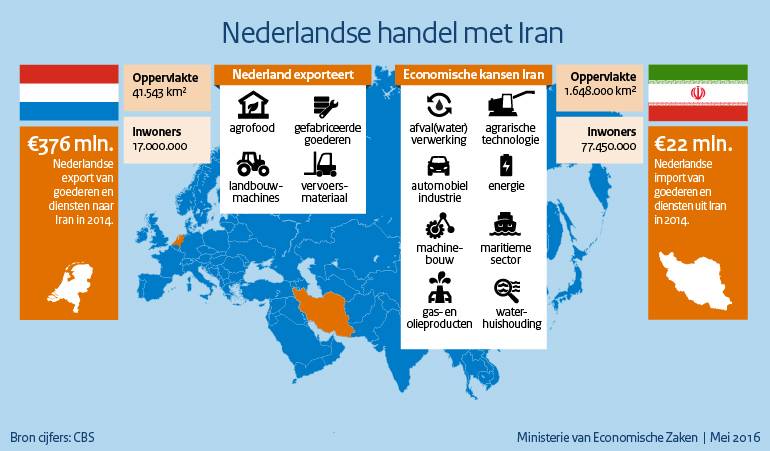 Adverio BV is visiting Iran with minister Schultz van Haegen (infrastructure an Environment) and a delegation of Dutch companies from Sunday 23 October 2016 to Friday 28 October 2016. The reason for the trip to Iran is: to strengthen the economic relationship between the two countries so that Dutch companies can gain access to the Iranian market.

After the nuclear agreement in 2015 the economical sanctions were suspended for Iran. The Dutch government subsequently made efforts to establish a good economic relationship with Iran. Minister Schultz focuses specifically on promoting trade relationship in topics related to maritime and environmental technology.

Minister Schultz: “After neglected western companies for almost a decade, Iran has an enormous need for knowledge and products in areas where the Netherlands is very ahead of. Iran faces major challenges in maritime technology, for example there is an increasingly limited amount of water to provide the population of drinking water, and to have sufficient water available for the industry and agriculture. For Dutch companies there are a lot of opportunities to share knowledge about efficient water use, water purification and desalination of water with Iran. With subjects as building harbors and logistics Dutch companies also have a lot to offer.”

The trade delegation is having conversations with Iranian ministries in Teheran, and there are meetings between Dutch and Iranian companies. These meetings are focused to strengthen the cooperation between the two companies. There also is a visit to the Iranian port city Bander Abbas. Iran is investing in port development in the coming years. For example, the port of Chandahar, close to the Pakistanian border, is being expanded. The port of Bandr Abbas is also being expanded and renewed. Dutch companies as BAM, Van Oord and Rotterdam Harbor have a big expertise for this and are also part of the Dutch delegation.